Why you’ll love a Somerset road-trip at Cheddar Gorge

Hairpin bends through Cheddar Gorge and highlights of Somerset, England 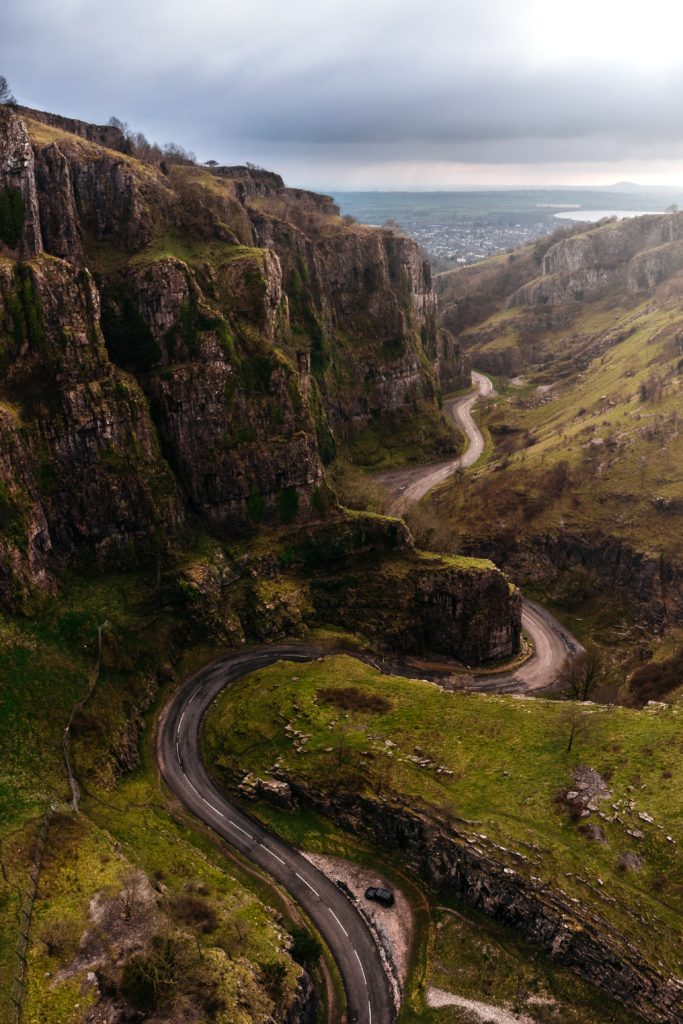 Hairpin bends through Cheddar Gorge in the Mendip Hills of Somerset, England. Photo by Thomas Tucker on Unsplash.

If you like driving hairpin roads, you’ll love the drive through Cheddar Gorge, which cuts through the Mendip Hills, near the village of Cheddar, in Somerset, England. The road meanders three miles through the gorge passing near vertical cliffs of up to 449 feet at the highest point.

Home of Cheddar Man and, of course, the world-famous Cheddar Cheese

And, if you’re wondering, Is this where Cheddar cheese originated? You’d be right. The world famous cheese is still produced in the village today at the Cheddar Gorge Cheese Company.

Although cheddar cheese is made all around the world now, only cheddar produced in the southwestern counties of Somerset, Dorset, Devon and Cornwall, bare the true mark of the original cheese. You can even take a tour of the Cheddar Gorge Cheese Company and see first-hand how they process their premium product, Cave-Aged Cheddar, which is matured in Cheddar Caves. You’ll also get a chance to taste and buy some cheese in the shop afterwards.

Cheddar gorge is also the site of the Cheddar show caves where, in 1903, Britain’s oldest complete human skeleton, Cheddar Man, was found. His remains are estimated to be over 9,000 years old.

This area of Somerset is a great place for hiking and other sightseeing, including Wookey Hole Caves, a series of limestone caverns close to the quaint village of Wookey Hole, which overlooks the Mendip Hills, just 20 minutes away.

Accommodations in the Mendip Hills area include bed and breakfast, small hotels and self-catering homes, as well as camping and caravanning (for north Americans camping means in a tent, caravanning is in a trailer, which you call camping).

Cheddar Gorge is roughly a 2 1/2 hour drive by car from Heathrow airport. However, it is closer to an historical site you may already be familiar with and already want to visit: Stonehenge, which is 75 km (or about 1 hour 14 minutes) away, and even closer to Bath, 37 km (or about 48 minutes) away, where you’ll find the famous Roman Spas in Bath. So, if you are already visiting either of these two sites, and you’re planning on staying in the area, consider a road trip to Cheddar Gorge during your stay. 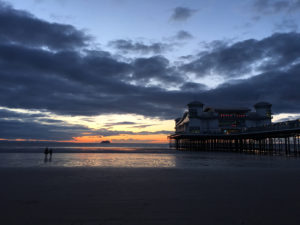 A 35-minute drive further West of Cheddar will take you to the west coast and two popular seaside towns on the Bristol Channel: Weston-Supermare or Burnham-on-sea. Not necessarily the best seaside resorts in the UK, but if you live in Canada or the USA and a drive to the ocean takes a day or more, you’ll appreciate being able to get a breath of sea air. If you look across the channel, you’ll also see Wales, birthplace of my father and other family members.

Soak in the history, culture and cider (oo-ah, oo-ah) in Taunton

If you like history and culture, continue on from Burnham-on-sea for about 35 minutes through Bridgewater to Taunton which is famous for its cider and is steeped in religious and military history. Here you’ll see a 10th century monastery as well as Taunton Castle, now home of the Museum of Somerset.

If you would also like to sample Taunton’s delicious cider which is an alcoholic beverage, a night’s stay is must here to avoid drinking and driving afterwards. There are plenty of accommodations to choose from including hotels, bed and breakfasts in farm houses and guest houses as well as campsites to pitch an RV.

Return back to London or continue on?

Depending on your length of stay in the UK and your preferences, from either Bridgewater or Taunton you can either circle (or rather meander) back to London via the south coast passing through such historical seaside towns as Bournemouth, Portsmouth and Brighton or, if you would like to see more of the west country, a 70 km (or about 80 minute) drive northwest will take you through the scenic Exmoor National Park (two thirds of which are in Somerset and the other in North Devon). On the northern edge of Exmoor, at the coast, you’ll find another gorge. 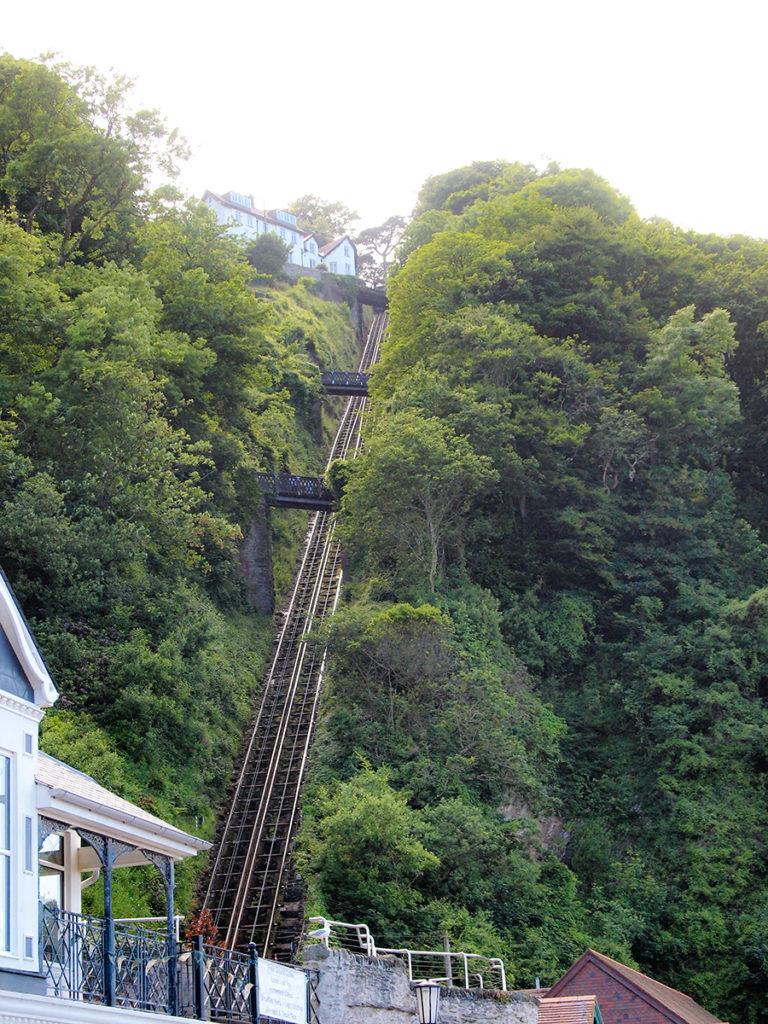 The water powered funicular railway at Lynmouth. We were there in the evening so it was closed at the time.

Another gorge, a quaint village and a water-powered funicular railway

Here two quaint villages, Lynton and Lynmouth, sit one above the other. Lynton is located at the top of the gorge, 700 feet (201 m) above Lynmouth harbour at the bottom of the gorge. These twin towns are famous for their Funicular Cliff Railway which connects them. Still operational today, it is the highest and steepest totally water powered railway in the world!

This is one of my mum’s favourite places, where she has taken me during visits back home to the UK so I just had to include it in this article, even though it’s in North Devon not Somerset.

Talking of my mum…she has been to Somerset several times. I couldn’t write a blog post about Somerset without asking her to contribute to this article, so I asked if she could give me her five favourite places with distance from Cheddar Gorge and why she likes them.

Below are SIX of her favourite places in Somerset (in order of distance from Cheddar Gorge) that you too may find worth a visit if you are road-tripping in the region.

Dunster Castle has amazing gardens in which there is a working water mill where they still make stone ground flour which is available to purchase. In the centre of the town there is an interesting timber-framed octagonal building, the old yarn market. On one visit, I actually bought matching cerise handbag and shoes from a little shop opposite this market hall to wear to my son’s wedding.

Selworthy is an extremely pretty tiny village with pink thatched cottages around the village green where you can get a cream tea. In the church, there is an interesting matchstick model of the church. The church sits on a hill from where you get a fantastic view of Porlock Bay and Exmoor. There are woods nearby in which to walk. On the way to Porlock from Selworthy, it is worth a short stop at the village of Allerford, where there is an ancient, much photographed packhorse bridge.

The caravan site at West Luccombe is situated on the banks of a babbling brook. From there you can walk along the brook listening to it tumbling over the rocks and cobbles through Horner Woods and, if you are feeling energetic, you can reach Dunkery Beacon, the highest point in Exmoor with its magnificent views. You can see for miles (up to 86 miles according to Wikipedia). 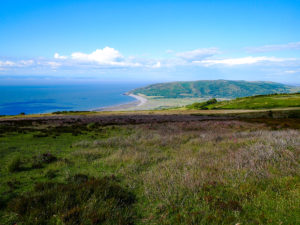 View of the ocean and the Somerset coast towards Porlock from Exmoor National Park.

A quaint coastal village with a lovely old 13th century pub, the Ship Inn. It is worth carrying on to Porlock Weir to see the sea but don’t expect to see a nice sandy beach, because the beach between Porlock and Porlock Weir is composed of boulders. There is a lovely wooded walk between Porlock and the Weir. The route across Exmoor from Porlock to Lynmouth is fantastic, with several viewing points. Leaving Porlock it starts with a 25 percent hill with hairpin bends, so don’t expect to be able to tow a caravan up it. However, there is a longer alternative toll road to take.

This is what Somerset is all about. Stunning views, beautiful wooded valleys and babbling brooks. By far and away the best of the three West Country moors. Any route you take is full of interest, but it is worth doing the Doone Valley, about which Richard Blackmore based his book “Lorna Doone.” So many walks, so much stunning scenery, peace and tranquility. Ahhh! 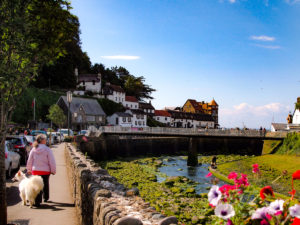 I know I was supposed to only list five places (and my daughter has already mentioned above), but if anyone comes this far they must, must, must go to Lynmouth, although it is in Devon. It is the most delightful little harbour village. A two mile walk alongside the river Lyn takes you to Watersmeet for a Devonshire cream tea, listening to the birds and the two waterfalls where the waters of two rivers meet. A ride on the funicular railway up to Lynton and a walk back down again will give you more stunning views of the bay, especially lovely just before sunset. Again, the beach consists of boulders, so don’t bother to take bathing suits. It is lovely to spend an hour or so outside the harbour-side pub with a glass of their best West Country ale and a basket of fish and chips just watching the sun go down. Heaven.

Want to go hiking and/or walking in Somerset?

If you’re touring Somerset by car or RV or staying in the area for several days and you love hiking or walking, read this article for more great places to do just that.