Why travel on The Ghan train from Adelaide, SA to Darwin, NT, Australia

Travelling on the Ghan from Adelaide, South Australia to Darwin, Northern Territory, Australia, is said to be one of the world’s greatest train journeys. A journey of 2979 km that takes just over two days, the Ghan stops at Alice Springs, Australia’s most central town, roughly halfway between Adelaide and Darwin, and Katherine before arriving at the Northern Territory Capital.

Why travel by train

Not only that, with no one to share the driving with, a long journey can become tedious and tiring, and if you’re concentrating on driving on unfamiliar roads (which you should be), you won’t get a many opportunities to see the views along the route unless you stop frequently.

Taking a train is a much more relaxing way to travel long distances and is also more environmentally friendly than flying. Travelling by train is also a great way to see sites along the way that you wouldn’t see if you chose to fly.

Not only that, if you’re travelling great distances on an overnight train means you don’t even need to book accommodation along the route.

Depending on the train’s schedule and the frequency of subsequent trains, if you purchase a hop-on-hop-off ticket or rail pass that allows multiple stops, you can often get off at points along the route for sightseeing, cultural experiences and other activities, and then catch another train later the same day. 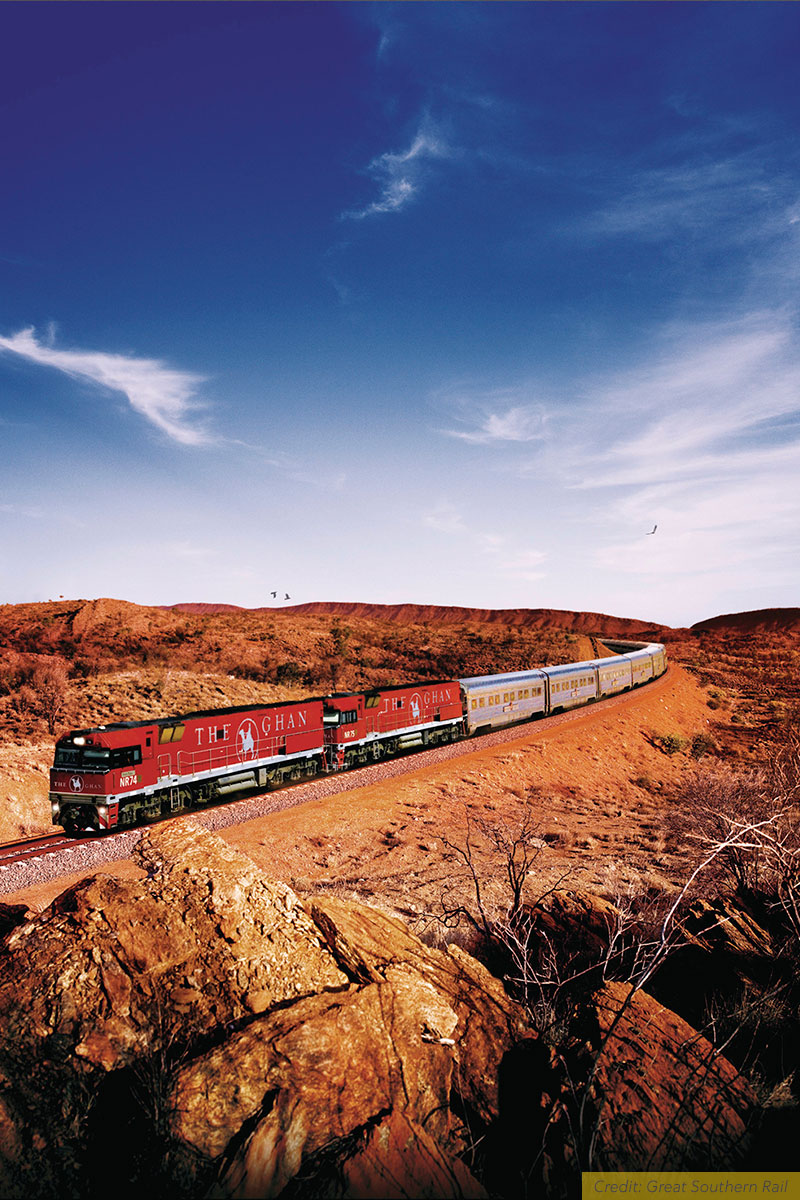 Why travel on The Ghan

Although the train only runs once a week (departing Adelaide on Sundays) there and back (departing Darwin on Wednesdays), travelling on the Ghan is an awe inspiring and relaxing way of seeing Australia’s rusty Red Centre and desert, rolling green hills and vineyards of the south, and the tropical rainforest of the Top End all in the same journey.

After departing Adelaide around midday, on your journey on the Ghan, you’ll see the beautiful wine country of South Australia, pass through the coastal towns of Coonamia and Port Augusta, cross over Dingo Fence, the world’s longest fence, which was erected to protect sheep flocks in South-Eastern Australia. You’ll travel through the night, stopping in Marla to watch the sun rise and enjoy breakfast in the heart of the outback.

As the train speeds its way through South Australia to Painted Desert, where rocky outcrops suddenly appear out of a flat landscape, you’ll pass small, rustic railway towns and huge expanses of Aboriginal land. Around noon the next day, you’ll arrive in Alice Springs, Northern Territory. 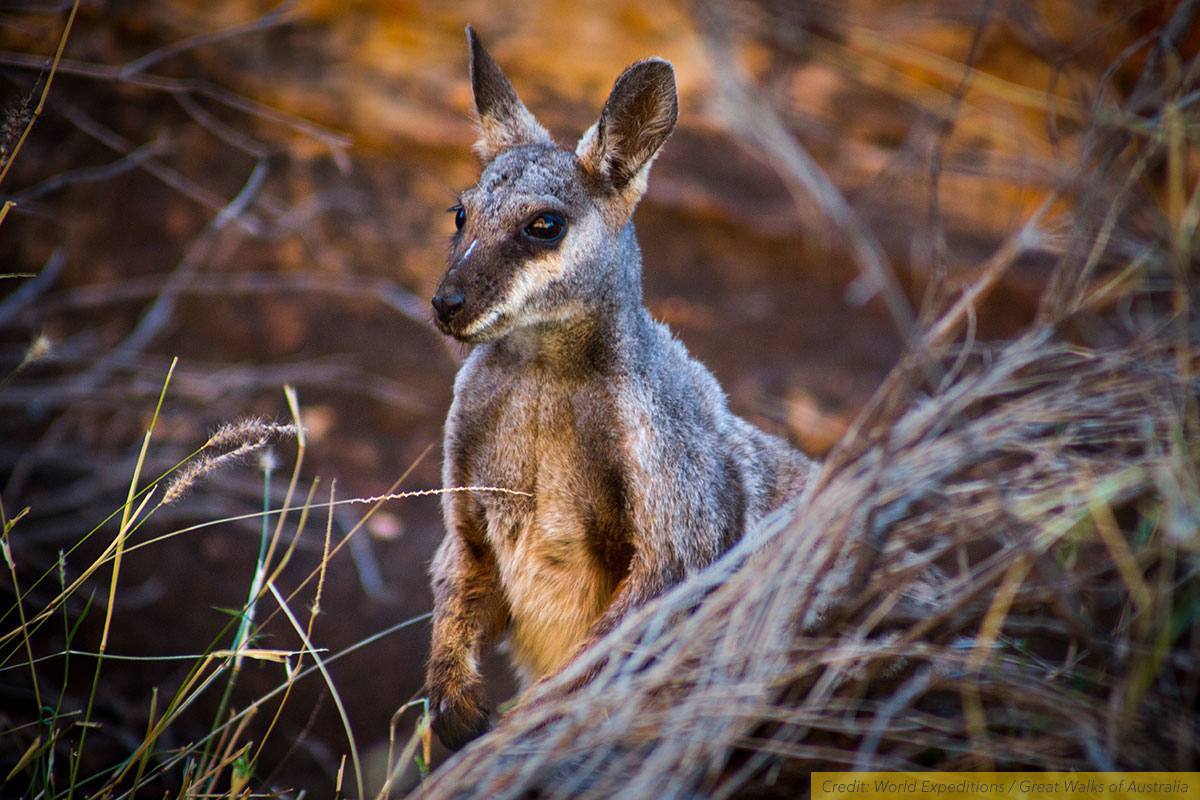 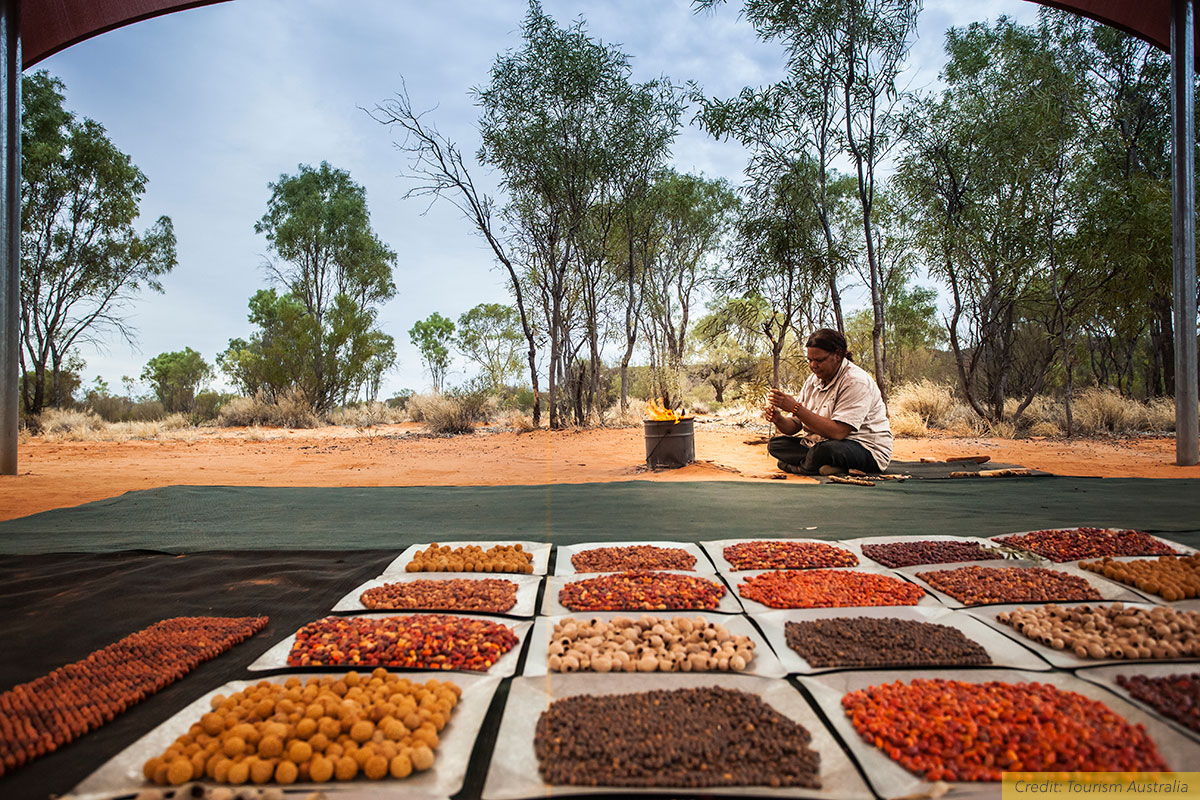 Explore for a few hours, a few days or end your journey on the Ghan here

In Alice Springs, you can choose to explore the town for a few hours before continuing on your journey to Katherine and Darwin on the same train. Or, you can opt to stay for a few days and make a side trip to Uluru-Kata Tjuta National Park, to experience The Rock, which is a must if travelling to the land down under.

If you choose to continue your journey on the Ghan the same day, you‘ll have just enough time to immerse yourself in local Aboriginal history on a guided tour of Alice Springs or by hopping on a bus and exploring the town independently.

If you’re feeling a little more adventurous, you can go quad biking across the desert or take a helicopter ride over Simpson’s Gap in the nearby MacDonnell Ranges, before the train leaves in the late afternoon.

However, if you have time, I highly recommend you stay a night or two in Alice Springs to experience more of town and explore the local attractions, such as the magnificent MacDonnell Ranges, The Alice Springs Desert Park and the Olive Pink Botanic Garden, follwed by a journey on the Red Centre Way to Uluru, either on a guided coach tour or a self drive tour. 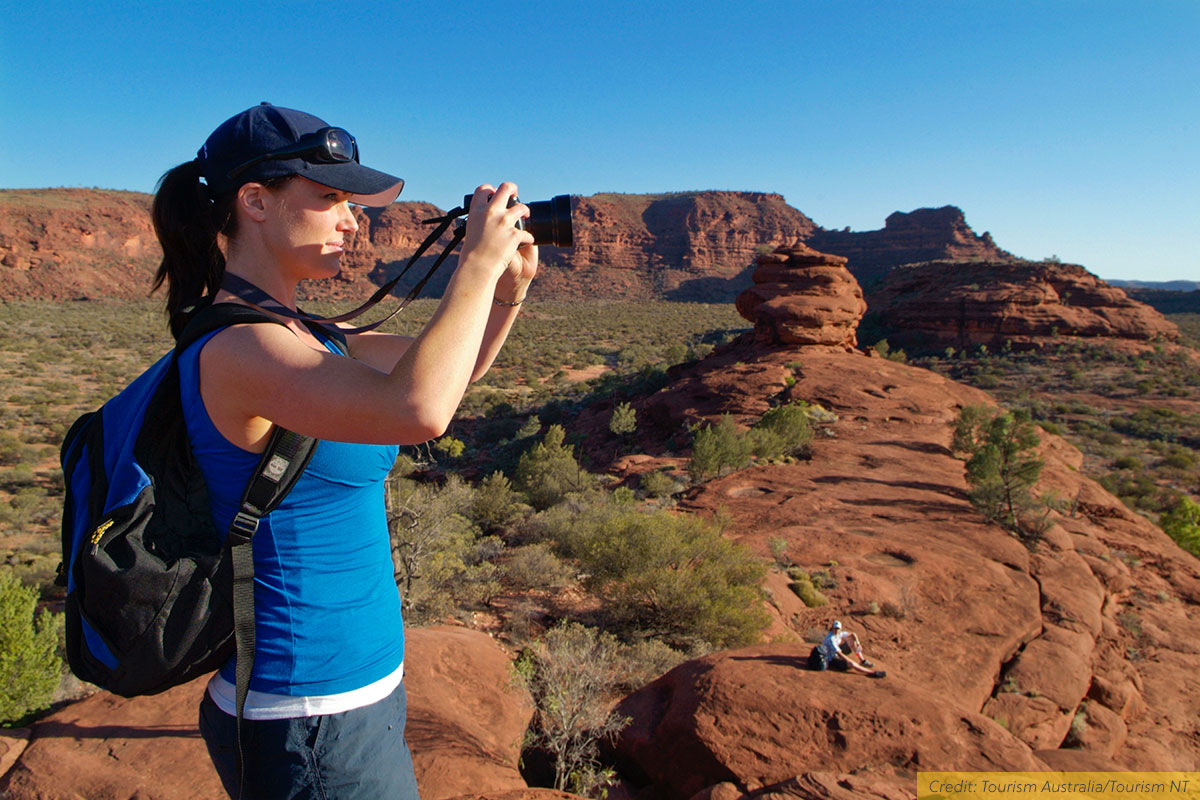 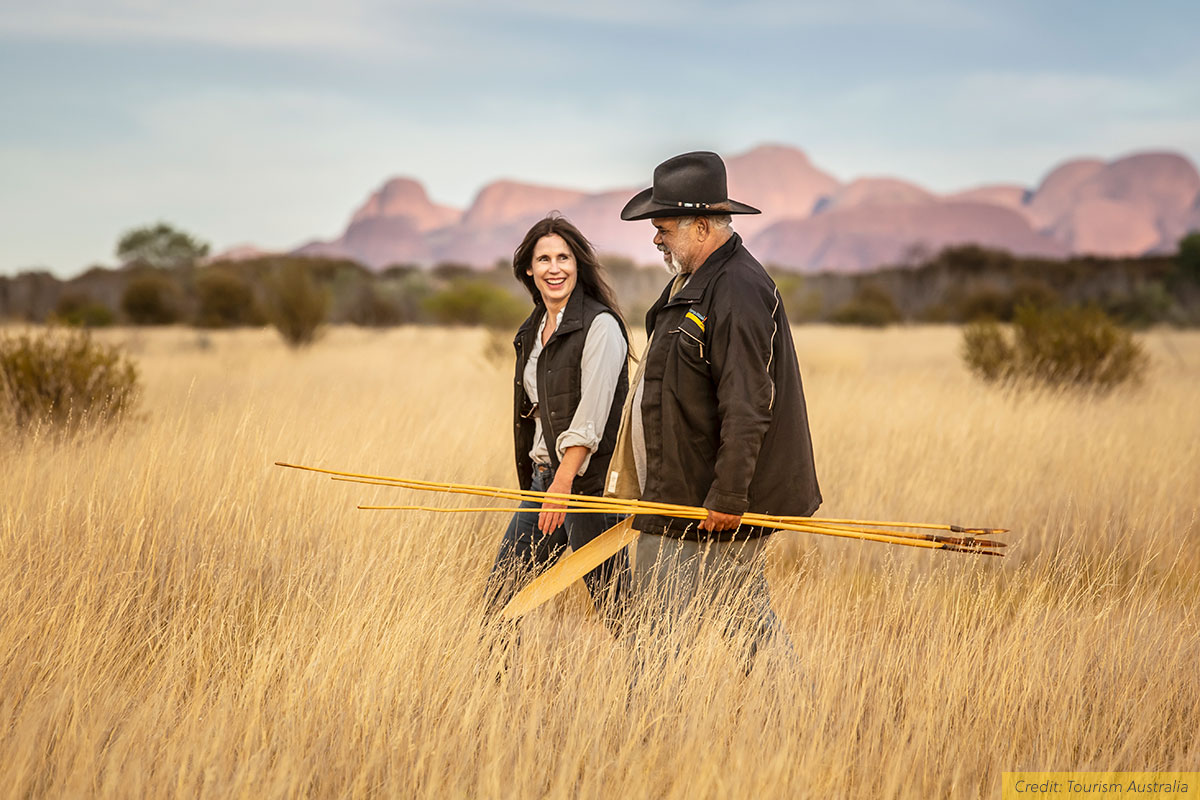 Staying overnight in Uluru is a must

You’ll need a few days for your journey to the Rock, which is roughly 470 km from Alice Springs. There are many other geological sites worth exploring en route, including the serene waterholes and the gorges of the West MacDonnell Range National Park, Simpson’s Gap, where you’ll find rock wallabies in and around the steep ridges, Standley Chasm, where you can watch its steep walls blaze red in the midday sun, Tnorala (Gosse Bluff), a comet crater that is 20 kilometres (12 miles) wide and 140 million years old, and Kings Canyon where you can climb to the rim for panoramic views of the sandstone cliffs, palm-filled crevices, valley floor and desert.

You must stay a night or two in Uluru Kata-Tjuta National Park to immerse yourself in the local geology and aboriginal culture on a guided tour through the wilderness with an Aboriginal guide. As well as watching the sunset and sunrise over Australia’s most famous landmark are must-do experiences.

You can then choose to head back to Alice Springs to catch the Ghan on its next journey to Darwin, or alternatively, you can fly to your next Australian destination or to your departing city.

Keep in mind the Ghan only runs once weekly from Adelaide to Darwin, there and back, so you’ll need to plan for 7 days exploring the Red Centre if you wish to continue on the Ghan, and you’ll need to plan to be back in Alice Springs before its next departure. 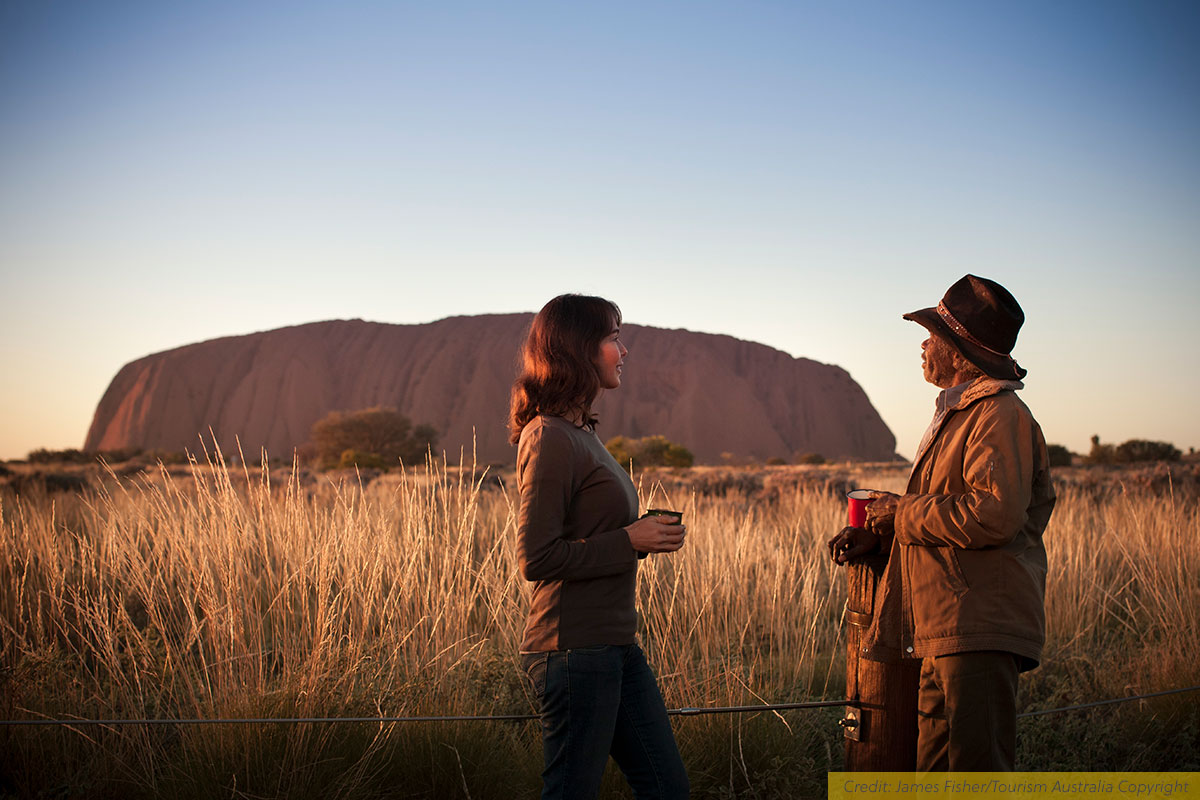 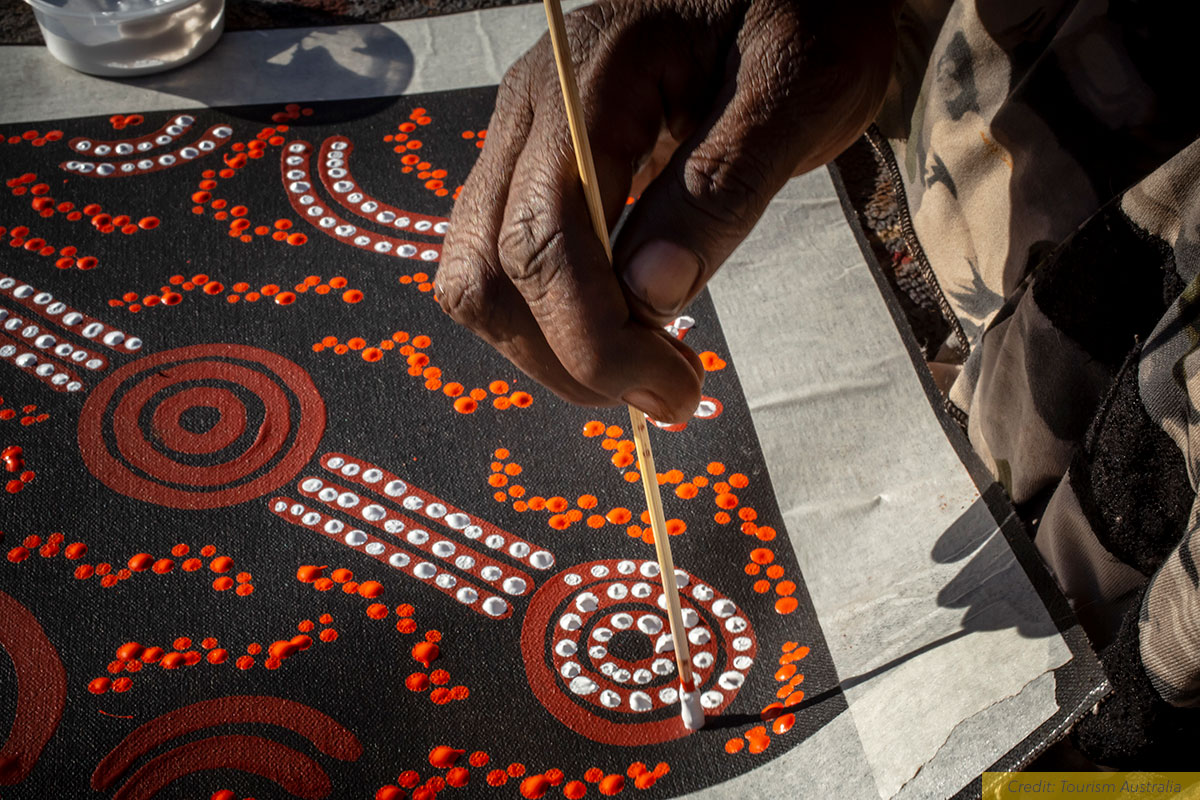 The second half of the Ghan journey

On the second half of this epic railway journey, the Ghan stops again in Katherine for a few hours before continuing onto Darwin in the late afternoon. There’s also lots to see, do and experience here too, including cruising down Nitmiluk (Katherine) Gorge or taking a helicopter ride over the gorge, getting up close and personal to birds and animals in Nitmiluk National Park or a nature cruise or canoe down Katherine River.

And of course the town of Katherine itself offers lots of attractions including a railway museum and local Aboriginal art gallery.

If you decide to stay in Katherine for a day or two, you don’t have to wait for the next Ghan to take you onward, in which case you would need to stay for a week. Instead, you can opt to drive or catch a bus or different train for the remainder of the journey onto Darwin, or if you’re short on time, you can fly to your next destination or to connect with your return flight home.

From Katherine to Darwin, you’ll pass through the old gold mining town of Pine Creek, and Adelaide River, once a World War II military headquarters.

Around mid-afternoon, the Ghan will roll into the Northern Territory’s tropical capital, the gateway to Kakadu National Park, where there is a ton of tropical rrainforests, wildlife, waterfalls and other water features to explore. 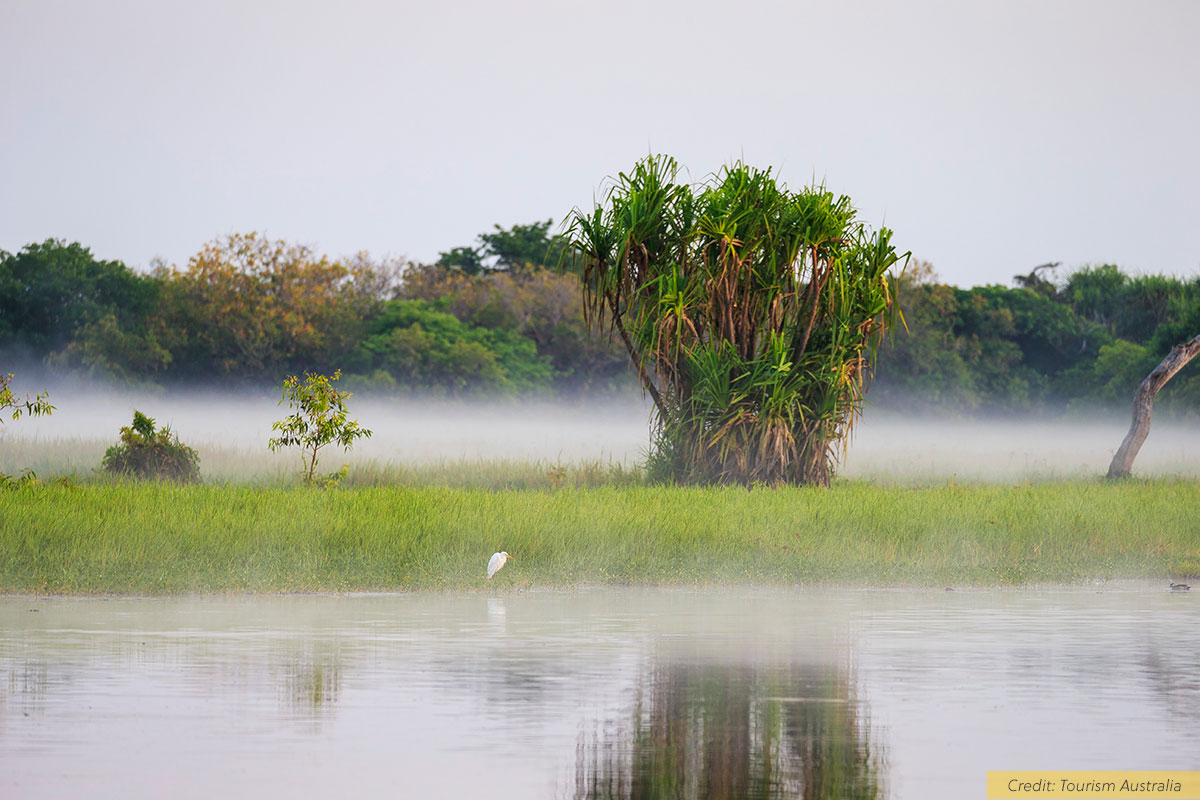 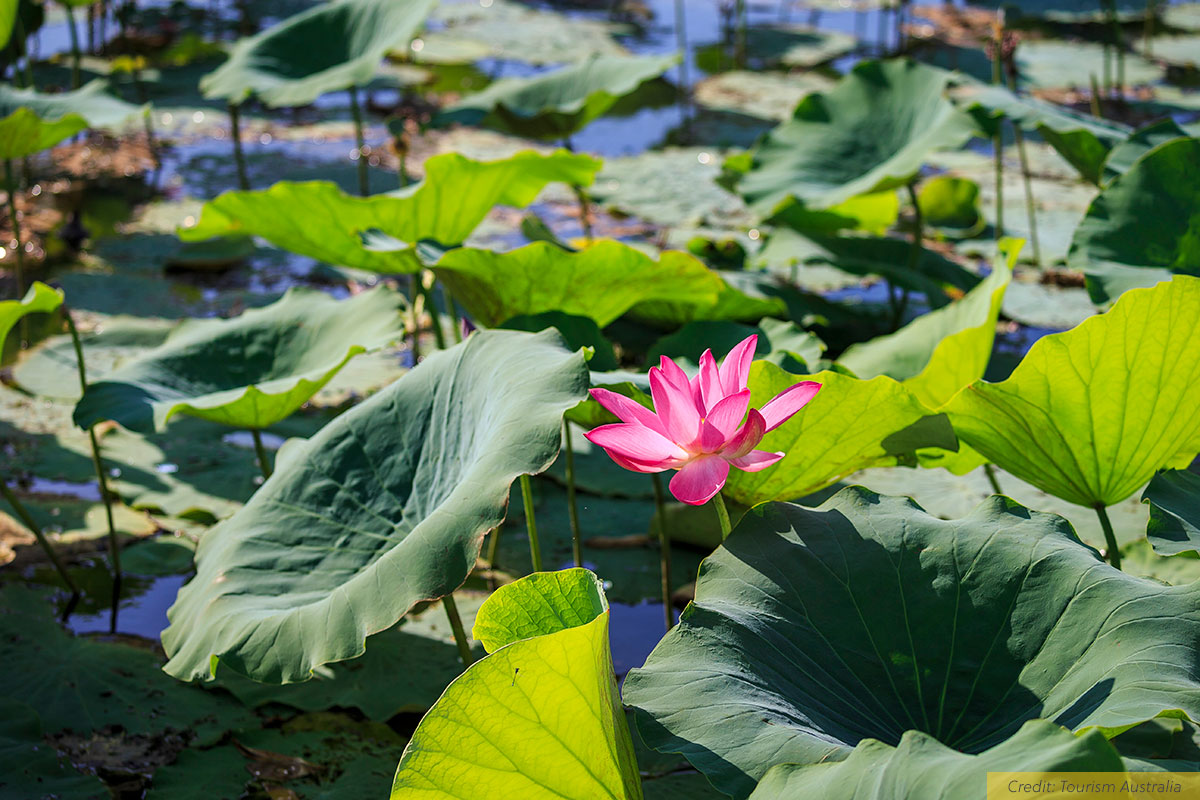 Will you experience the Ghan?

Needless to say, although there are several options to choose from for travelling at a new destination, including Australia, travelling by train is definitely a more relaxing and environmentally friendly way to see and experience areas you wouldn’t otherwise see by flying or driving.

The Ghan, especially, is a once in a life-time train journey that takes you on an adventure through Australia’s Red Centre and one I would recommend experiencing at least once in your lifetime, whether you decide to travel all the way from Adelaide to Darwin on the same train, stay for a side-trip to Uluru, and/or continue the rest of your Australian journey by car, bus or air.

Tidbits about The Ghan and other bits

The Ghan apprently got its name from the Afghan camels and their drivers? Before the railway was built camels used to carry supplies from Adelaide to Alice Springs. (Source: The Man in Seat 61.)

And did you know…

If you take the Ghan in reverse during April and October, the journey will take an extra day? Called The Ghan Expedition, the train takes 4 days with 3 nights on board. The train stops in Manguri, South Australia, for a day trip to Coober Pedi, the world’s opal mining capital.

Did you also know…

Many of Coober Pedy’s residents live underground? True. It is so hot in this Australian outback town that many homes are built underground where the temperature is much cooler and even throughout the year.  You’ll even find hotel and other accommodations underground.

Is a journey on the Ghan through the heart of Australia on your bucket list?

If you’re thinking of travelling on the Ghan through Australia’s Red Centre, stop dreaming…start planning. As an Aussie Specialist, Kaz Custom Travel can help you plan, create and arrange everything needed for an experience of a lifetime, not only on the Ghan, but anywhere you wish to travel in Australia.

Get in Touch to Start Planning
← Previous Next →