Seilebost: a Secluded Beach on the Isle of Lewis and Harris in the Outer Hebrides, Scotland 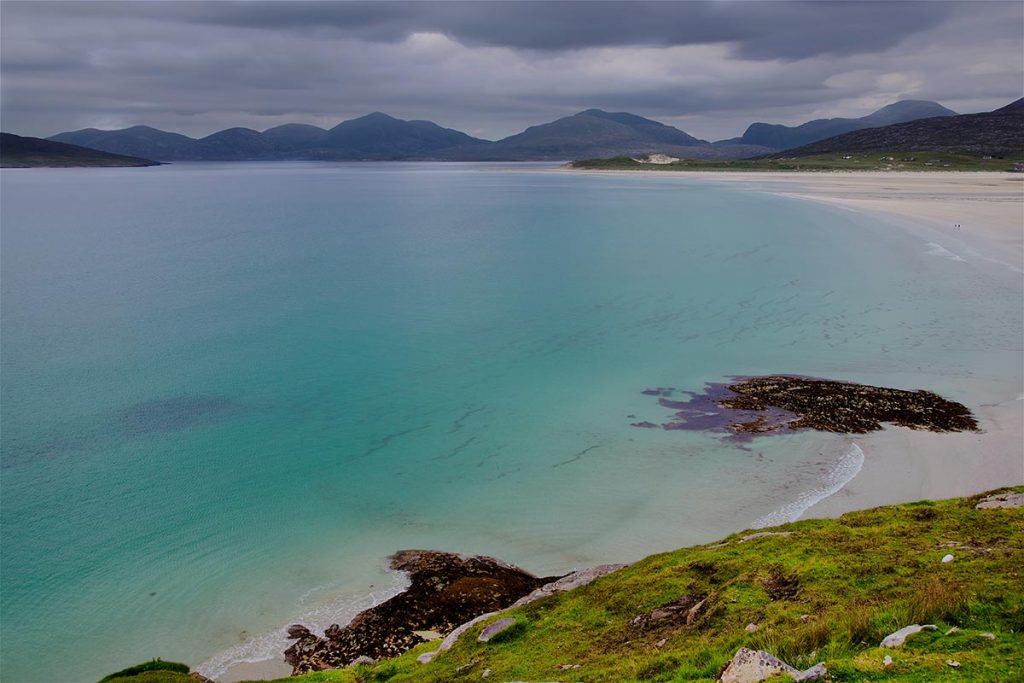 Seilebost: a Secluded Beach on the Isle of Lewis and Harris in the Outer Hebrides, Scotland

This month’s travel topic is Secluded Shores and, to start the month off, I wanted to share a secluded beach in the United Kingdom that I am familiar with: Seilebost Beach, located on the Isle of Lewis and Harris in the Outer Hebrides of Scotland. If you’re looking for a secluded beach, then Seilebost Beach, on the remote coast of Harris, is perfect, although, I cannot promise you will have beach weather even if you visit in the height of summer.

Seilebost is a small crofting village located on the Sound of Taransay in the north of Harris, the southern part of the Isle of Lewis and Harris, in Scotland’s Outer Hebrides. Often referred to as the Isle of Harris, it is actually joined to Lewis by an isthmus.

A narrow coastal road winds its way from Tarbert, the main settlement in Harris (located on the isthmus), and takes you right past this stunning beach.

On a road-trip from Stornoway, the main town in Lewis, to the southern tip of Harris many years ago, I drove past Seilebost beach. The views of the bay and the white sand beaches with the mountains of Harris and Lewis in the background, were spectacular!

What makes this beautiful beach, and all the others on Harris, so secluded is the remoteness of the Isle of Lewis and Harris combined with the ruggedness of the southern half of the island and the fact that it is sparsely populated. 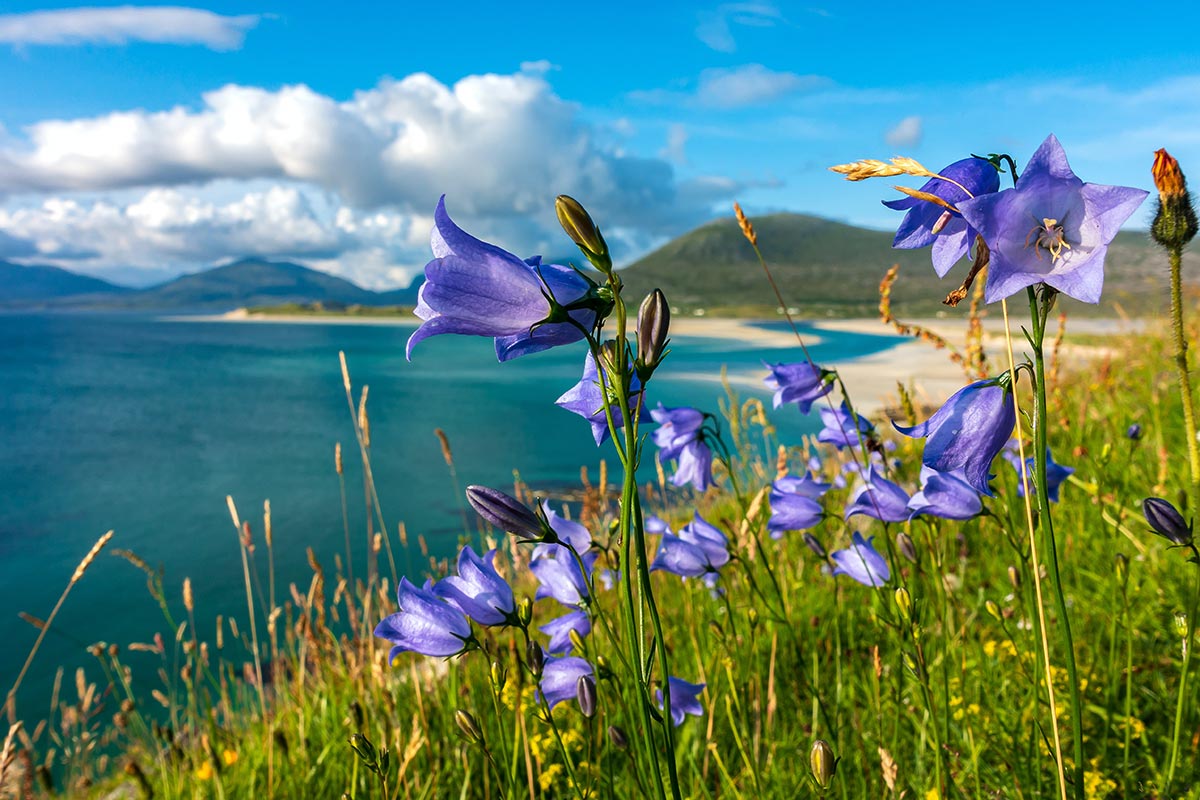 If you’re staying in Stornoway, you’ll need to drive from Lewis to Harris. The southern part of Lewis is very mountainous with many lochs. There are lots of twists and turns along the road as it winds its way to Tarbert. On the other side of the isthmus, the road makes a detour east around Harris’ largest mountain, Clisham, before it reaches the west coast again. The population on Harris is very sparse for good reason. 😂

Being located so far north and on the edge of the northern Atlantic Ocean, the weather can be a disadvantage too (insert rainy, foggy, cool). 😂 The best time to visit is in late Spring and Summer, when the weather is not only warmer, but flowers are blooming. I can’t guarantee you’ll enjoy a dip in the ocean at Seilebost beach anytime of year though. 😂 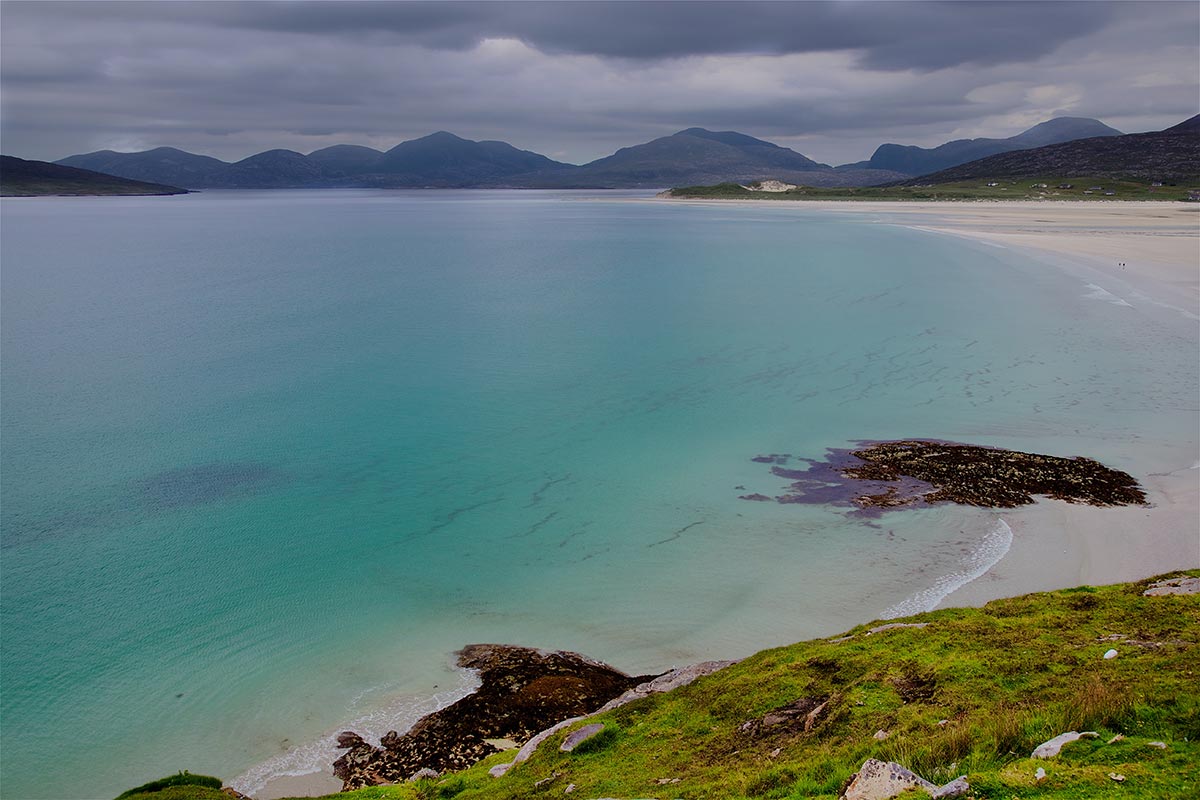 Pictured: Seilebost beach with the mountains of Harris and Lewis, as well as the tip of Taransay Island, in the background. (Photo by Paolo Chiabrando via Unsplash.)

Due to its remoteness, the sparse population and the ruggedness of the island, if you’re looking for seclusion, you’ll definitely find it at Seilebost Beach, and, if you drive further south along the west coast road of Harris, you’ll find even more, equally stunning secluded beaches. Just be prepared for plenty of driving along winding roads through rugged mountainous scenery to get there.

You can choose to go just for the day on a road-trip from Stornoway, like I did, if you arrive in Lewis from Ullapool, or from Tarbert if you arrive in Harris via Uig. If you’re on a road-trip from Stornoway and don’t have time to stop for long, there is a layby about half a mile west of the village where you can stop to take photos of the spectacular view.

There are a few guest houses in the village of Seilebost as well as a small camp site alongside the beach, where the views of the Sound and mountains is fabulous (according to the Outer Hebrides  website). So if you’d like to relax in the peace and tranquilty of this secluded beach for longer, I recommend you stay in Seilebost for a couple of nights. You can either do so at the beginning of your visit to Lewis and Harris or at the end. Just remember to book your ferry either from Uig (Isle of Skye) to Tarbert to get to the island or from Tarbert to Uig to get back to the mainland. (I recommend a night or two on the Isle of Skye too.)