If you’re looking for cultural experiences, the Top End region in the far north of Northern Territory, Australia, is one of the best areas in the world to find them. Two such areas in the Top End are Kakadu National Park, home to the world’s oldest living culture, and Nitmiluk Gorge, where more aboriginal rock art can be found than anywhere else in Australia.

Like most people, you may think of Australia as being a young country. However, Australian aboriginal culture pre-dates both the Roman Empire and Stone Henge. An aboriginal cultural experience is therefore a must on a visit to Australia if you love learning about different cultures, and the Top End, the name given to the north of the Northern Territory, is probably the best region in Australia to do so.

While you might discover evidence of Aboriginal culture in all of Australia’s states and territories, with only 4% of the population being of Aboriginal descent, without a guide to help you find it, you may have to look hard.

The Top End in the far north of the Northern Territory, however, has a much higher indigenous population compared with the rest of the country and much of the region’s lands are off-limits to non-Aboriginal people unless they are accompanied by a guide and/or have a permit.

Two areas that are not off limits and that are within easy reach of Darwin, the capital of the Northern Territory and the gateway to the Top End, are Kakadu National Park and Nitmiluk Gorge (formerly Katherine Gorge). In these two areas you’ll have lots of opportunities to experience aboriginal culture first-hand. 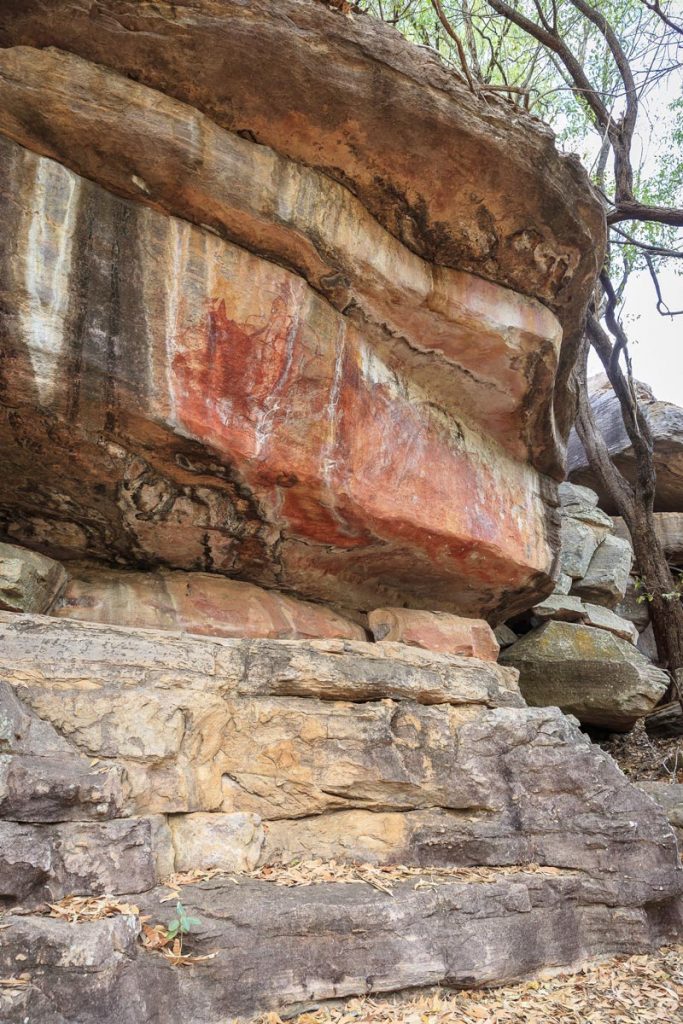 Australia’s largest National Park, Kakadu is home to the world’s oldest living culture. It is also a dual UNESCO World Heritage Centre, once for its natural beauty and once for its Aboriginal culture. As you explore the hiking trails in this unique archaeological and ethnological reserve, you’ll not only find stunning scenery, safe swimming holes, waterfalls, and lots of unique native wildlife, you’ll also discover an abundance of indigenous rock art.

The best way to experience and learn about the more than 60,000-year-old indigenous culture though, is on one of Tourism Australia’s signature aboriginal experiences. Escorted by a knowledgable aboriginal guide, you’ll learn about the ancient rock art, meet and see aboriginal artists at work, including basket weavers, painters, carvers & jewellery makers. You may even get the opportunity to help create eco-friendly indigenous jewellery, the way it’s been made for thousands of years 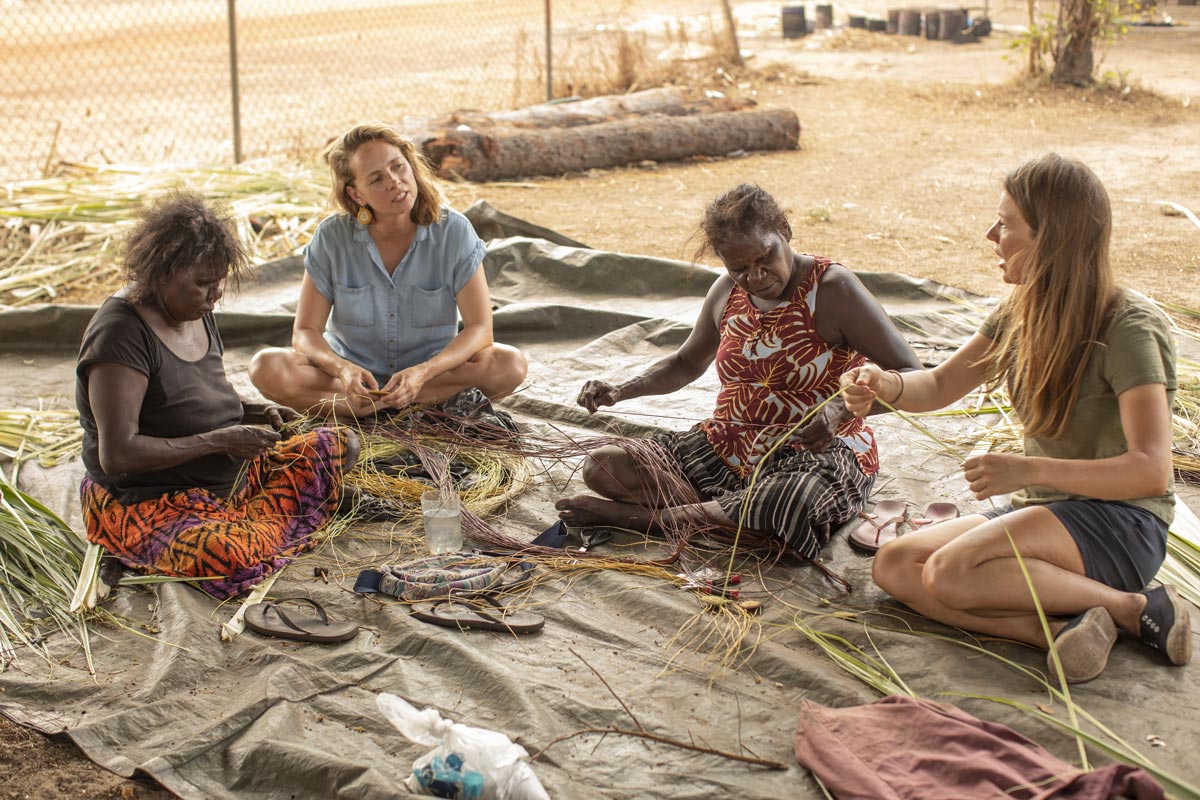 Also in the Top End is Nitmiluk Gorge (formerly Katherine Gorge), where the outback meets the rain forests. On a hike or cruise through the gorge, you’ll see an abundance of aboriginal rock art. You can hike the gorge independently, but if you want to learn about the rock art’s meaning and significance, a guided hike with an aboriginal guide is a must.

On a signature aboriginal experience of the gorge, you’ll also experience indigenous culture first hand and learn and participate in the ancient art of dot painting, fire lighting and spear throwing.

Note however,if you’re a woman, you will NOT get the opportunity to play the didgeridoo as only men are allowed to do that! 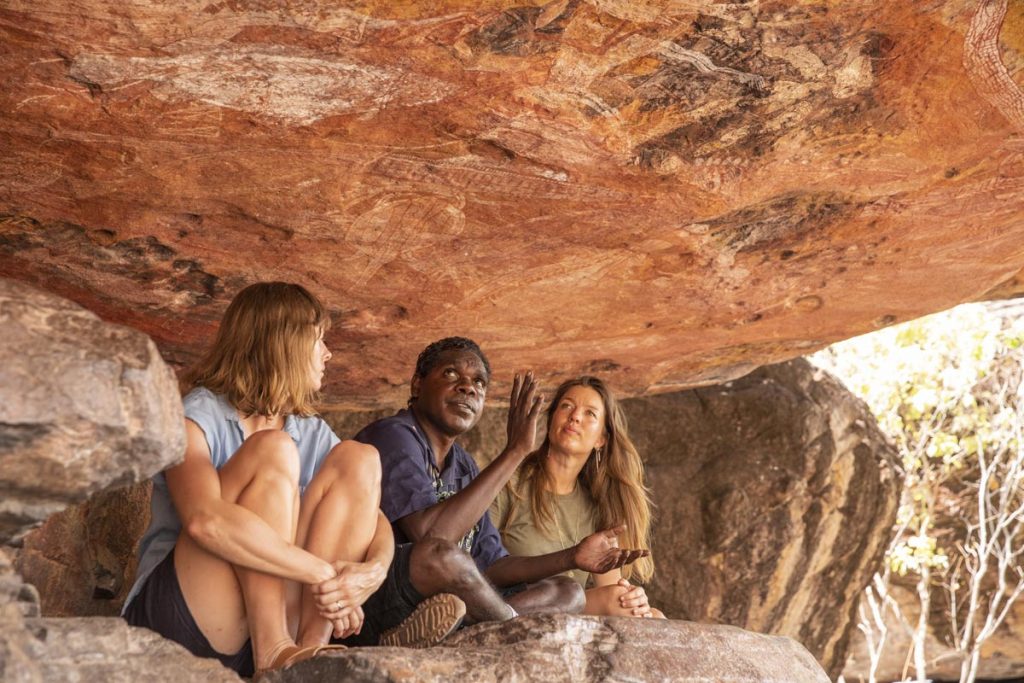 With Tourism Australia’s Signature Aboriginal Experiences, you’ll not only have the opportunity to experience indigenous culture first hand, you’ll learn from knowledgeable Aboriginal guides and the stories they tell about the myths, legends and heritage that shaped the world’s oldest living culture as well as the stories told by and the significance of ancient rock art and other artifacts you’ll discover in the area.

Other experiences that are available with an Aboriginal guide include exploring and camping on pristine beaches, sharing native Australian “bush tucker”, learning traditional hunting and cooking methods, experiencing the healing power of nature, sharing stories around a crackling campfire, immersing yourself in Aboriginal culture at festivals, as well as many outdoor activities including hiking, kayaking, cycling, fishing, four-wheel driving, snorkelling and swimming.

To learn more about Tourism Australia’s Signature Aboriginal Experiences or for help with a custom itinerary that includes cultural experiences in the Northern Territory (or any other state/territory of Australia for that matter), get in touch with me to start planning your trip of a lifetime to Australia now.

Have you put Cultural Experiences in Australia on your bucket list?

If you’re now dreaming of visiting Australia, stop dreaming…start planning. Kaz Custom Travel can help you plan, create a custom itinerary and arrange everything needed for a cultural experience of a lifetime in this vast, unique and diverse land down under.

Get in Touch to Start Planning
← Previous