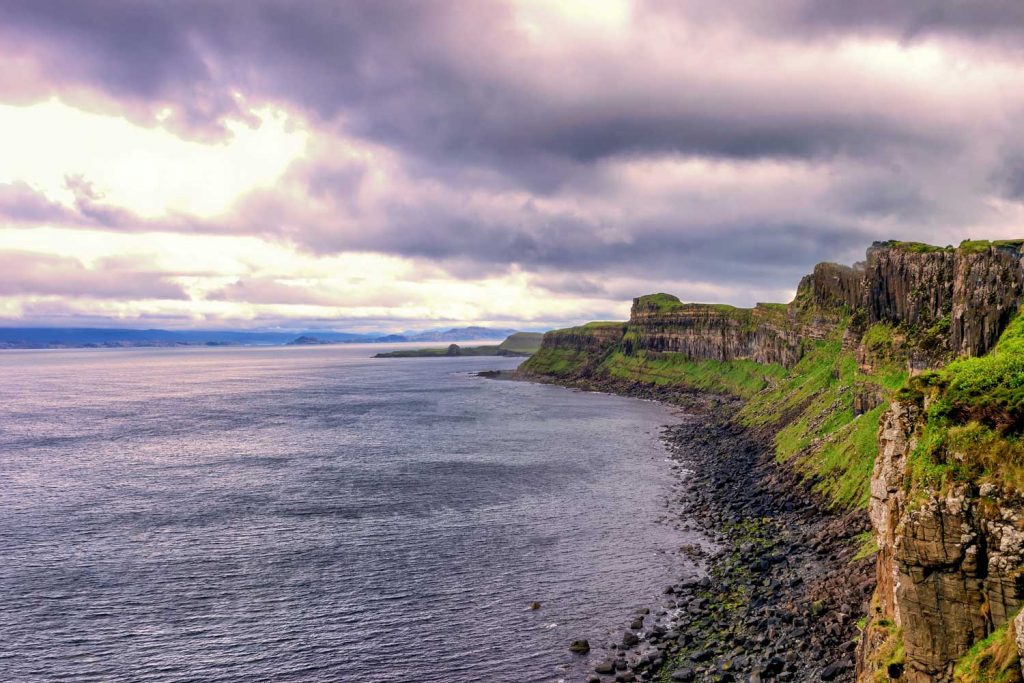 This week in our virtual tour Around the World from A to Z, the British Isles is featured. I have already written about Britain here, but in this article I will also include differences to look out for when driving in the British Isles as well as safety tips for pedestrians, safety tips for solo female travellers. I also highlight some features in my favourite region of Great Britain. 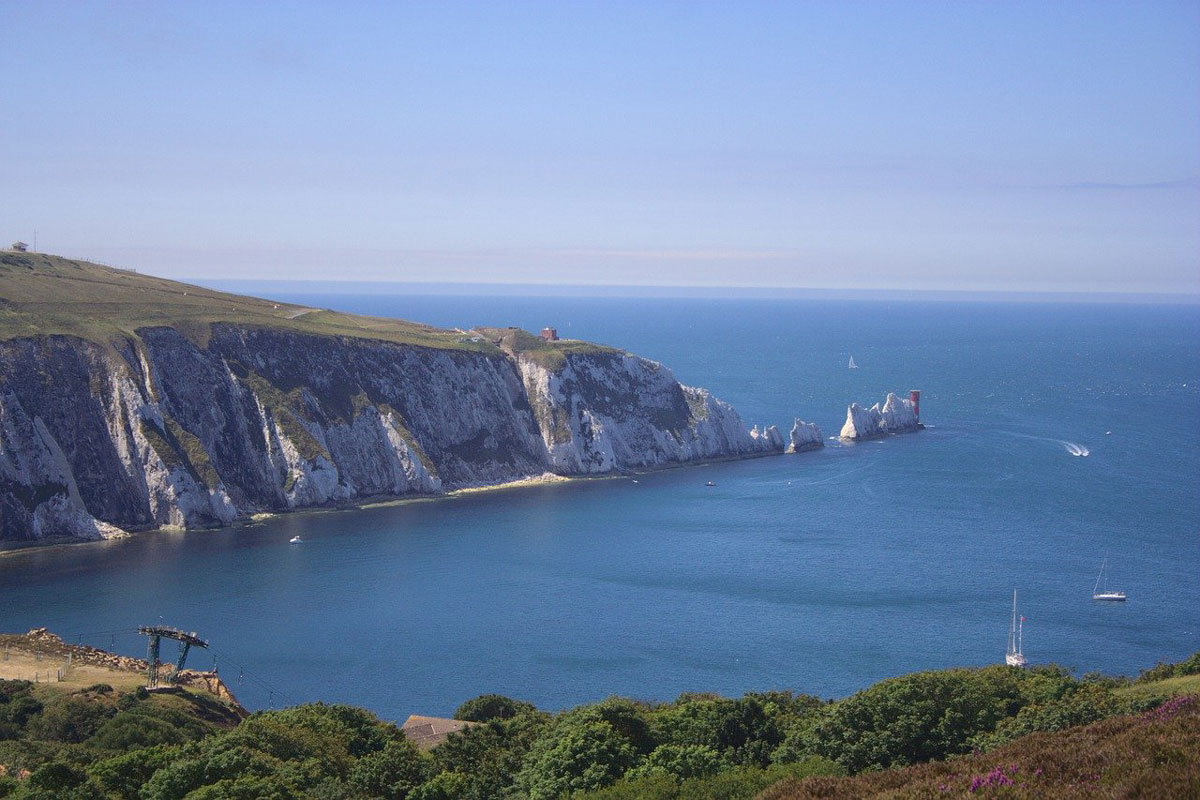 The Needles Isle of Wight England

So, let me introduce you to British Isles and give you a few insights

As you may or may not already know, I am a dual citizen, both British and Canadian. I was born in Great Britain. I am English and when I talk about my home country, I refer to England, but when asked where I’m from, I usually say I am from the UK (United Kingdom). Confused? To confuse you further…we also talk about the British Isles. But England, Great Britain, the United Kingdom and the British Isles are not one and the same.

Let me help clear up some of the confusion (hopefully).

Sometimes confused with Great Britain or the United Kingdom, these three entities are, in fact, not the same. The British Isles is neither a country nor a single political state.

The British Isles is actually an archipelago made up of over 6,000 islands. In case you don’t know where it is…it is located in the North Atlantic Ocean, north of France, across the English Channel which separates it from mainland Europe.

Great Britain is the largest island in the British Isles archipelago and Ireland, or Éire in Gaelic, is the second largest. Other islands and groups of islands in the chain include Isle of Man, Isle of Anglesey, just off the coast of northwest Wales, the Outer Hebrides (including Lewis and Harris, Barra, and Grimsay), the Inner Hebrides (including the isles of Skye, Mull, and Iona), the Shetland Islands & the Channel Islands (including Jersey and Guernsey).

Great Britain is the largest island in the British Isles and is comprised of three countries: England to the south (where I’m from) the largest country of the three, Scotland to the north and Wales to the west of England.

Ireland is the second largest island in the British Isles and is located to the west of Great Britain. It is split between two countries, the Republic of Ireland which takes up the bulk of the island in the south (26 counties) and Northern Ireland (sometimes referred to as a country, province or region) in the northeast corner (6 counties).

While Northern Ireland has been part of the UK since May 3, 1921, the Republic of Ireland is an independent sovereign state with its own parliamentary system. Similar to the USA, the head of state is the President of Ireland. When travelling between the two countries, there is no border control and you probably would not notice you were in a different country, until you stop to purchase something using cash.

Although geographically located on the European continent, neither the United Kingdom nor the Republic of Ireland are members of Europe’s Schengen Area, an area of Europe made up of 26 member countries between which border checks have mostly been abolished.

Since Brexit, the United Kingdom is now no longer part of the European Economic Union, whereas the Republic of Ireland is still a member. The Republic of Ireland is also part of the European Currency Union, which means the currency is the Euro, whereas, in Northern Ireland, like the rest of the UK, the currency is the pound sterling. 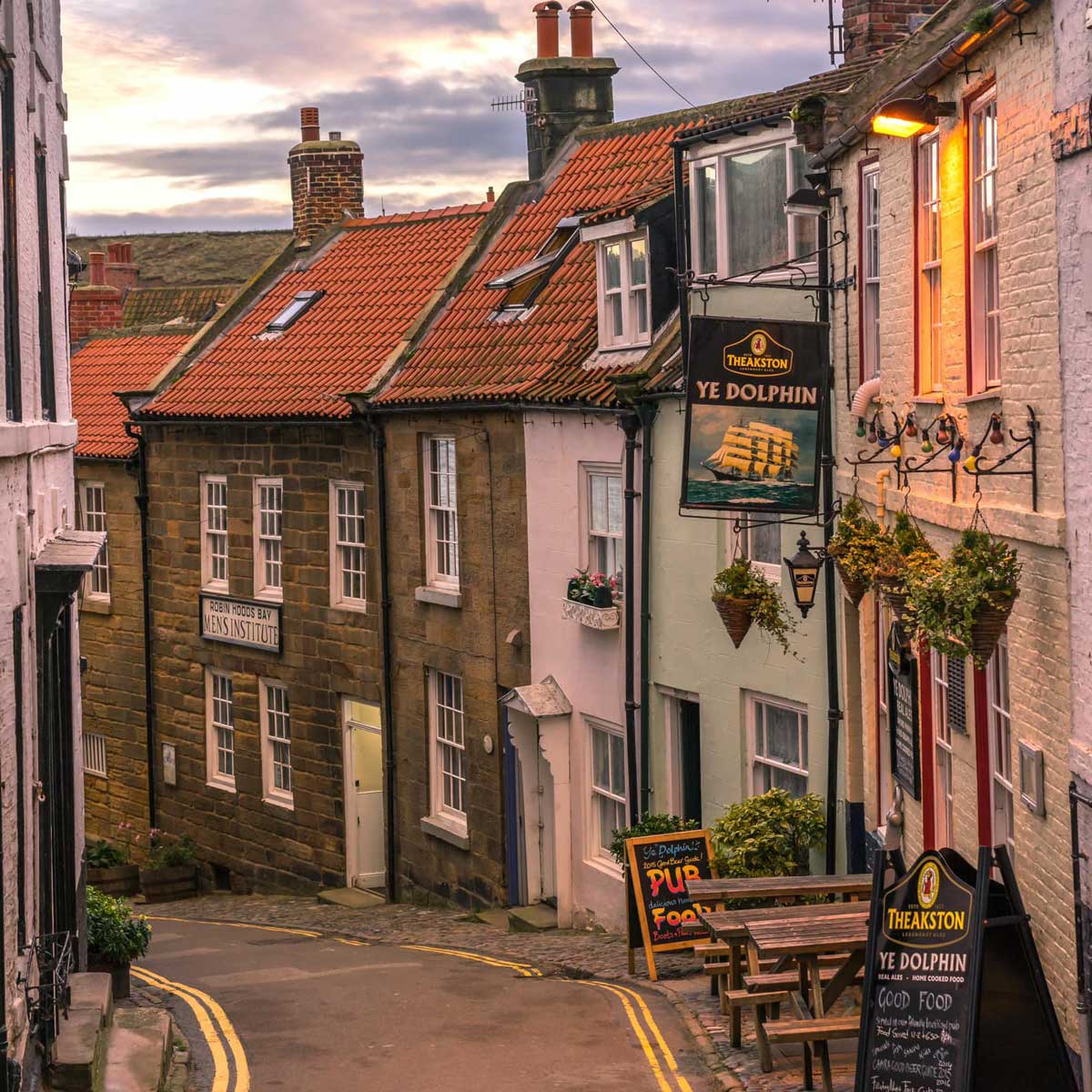 Ye Dolphin is a traditional English pub very close to the sea on the east coast of England. Photo is by Michael Cummins Photography via Pixabay.

Driving in the British Isles

Not all roads in the British Isles look like the road pictured above. Whether you’re driving on a narrow road like this or on a busy motorway, the rules of the road vary slightly in both the UK and Ireland  compared with those in Canada. 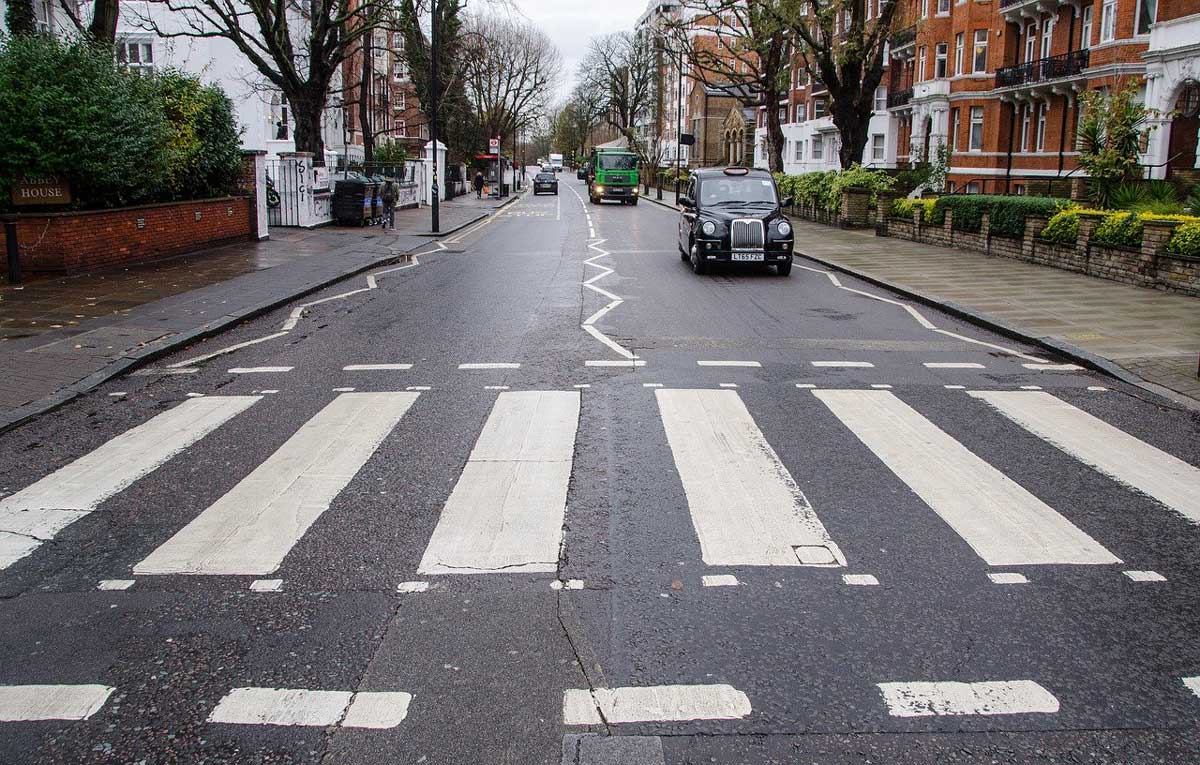 The zebra crossing on Abbey Road was made famous by the Beatles’ album by the same name. The Beatles were famously crossing over the road on the album cover. Photo via Pixabay.

Although you may not drive while visiting the UK or Ireland, you will be a pedestrian. Here are a few tips that I know to be different from those in Canada. 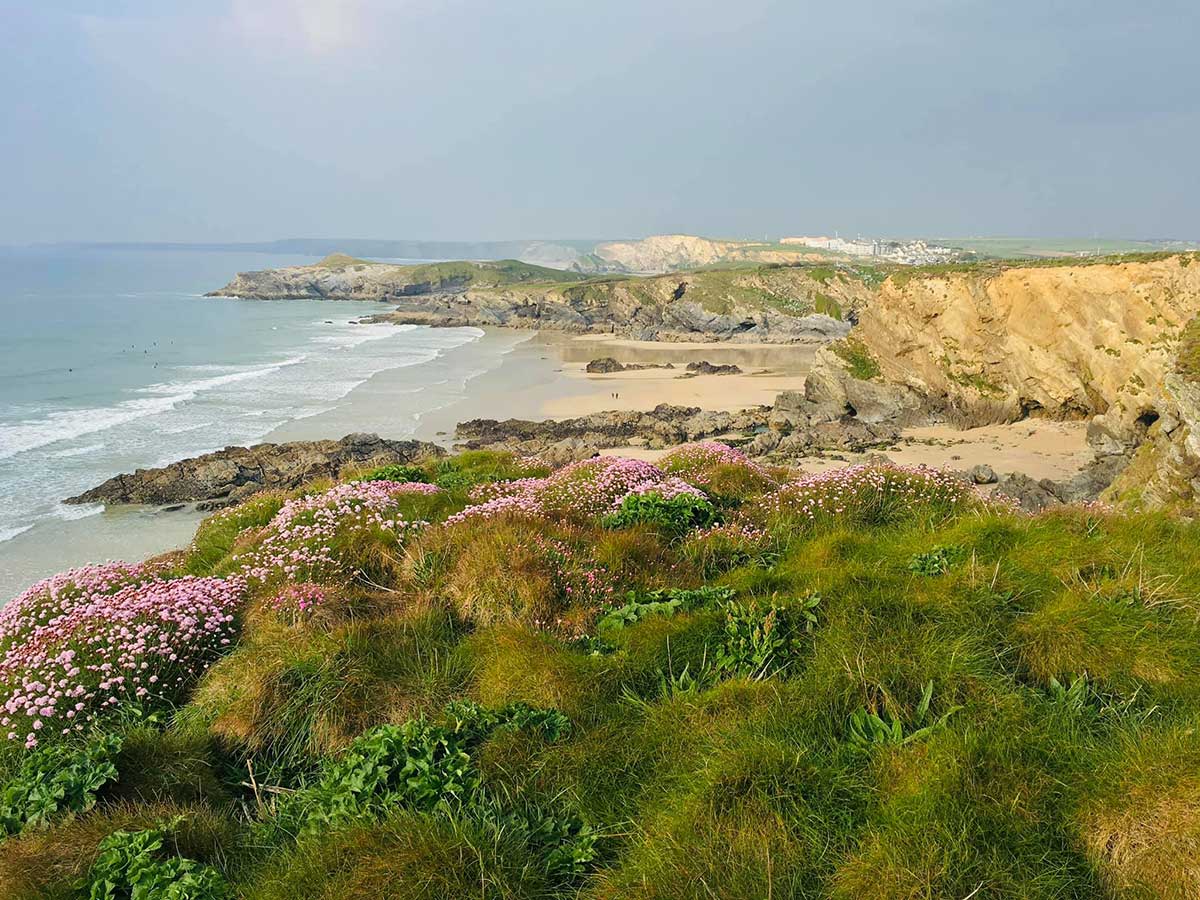 Where to go in the British Isles?

Well it really depends on what your interests are, how long you’re staying and what style of trip you’d like.

I have travelled extensively in Great Britain – England, Scotland and Wales—but I have to admit, I have yet to visit Ireland (although it’s on my bucket list). I have a few favourite places – too many to list in this blog post, but you can discover a few here. Instead, I am going to highlight just one region that is my favourite and is ideal for anyone who likes to get outdoors in nature, who loves culture, history and heritage, and who loves to be by the ocean.

The region is South West England, which encompasses the seven counties of Cornwall (where my mum now lives), Devon, Dorset, Somerset, Bristol, Gloucestershire and Wiltshire.

I have visited and travelled through all seven counties at various times throughout my life. However, Cornwall is my absolute favourite but I am probably biased. I holidayed in England’s most southerly county throughout my formative years, and as an adult, my mum moved here a few years ago and I visit regularly for several weeks at a time and love it—no matter what time of year!

A coastal footpath (the South West Coast Path) runs the entire length of the southwest coastline (its the longest signposted footpath in England at 630 miles) starting  in Minehead, Somerset on the north coast and ending in Poole, Dorset on the south coast.

The path meanders near cliff edges around coves, bays and rocky inlets, from where the ocean views are magnificent, it undulates up and down craggy cliff-sides (don’t worry, there are usually steps or curves to lessen the steepness of the path) and across beautiful golden sand beaches, one of which stretches for 2 miles, it crosses over wide river mouths and small streams, and passes through quaint fishing villages and bustling seaside towns.

The South West Coast Path is dotted with historical, cultural and industrial artifacts (the tin mines on the Cornwall and Devon Landscape are part of a UNESCO World Heritage site), prehistoric rock formations – (both natural and man-made) eroded by the ocean and wind over millennia, bird sanctuaries and nature reserves, and familiar filming locations of period TV dramas and various movies.

South West England is a haven for history and archaeology enthusiasts as well as nature lovers. You’ll find an abundance of National Trust sites (both natural landscapes and man-made structures) most of which are open to the public throughout the year.

For history and archaeology enthusiasts, the whole area abounds in centuries old cathedrals, castles and churches, museums and art galleries. You’ll find thatched cottages and farm hamlets, ancient stone circles, quoits, fougos, wells and forts, as well as other prehistoric archaeological remains and artifacts. In fact, Wiltshire, the county in which Stone Henge is located, has the most prehistoric monuments. You’ll also find industrial relics and engineering marvels from the areas more recent past, including tin mines built during the industrial revolution era.

For those that love the outdoors, you’ll find moorland heaths with wild horses and other wild animals, gorse bushes and fields of flowers, woodlands and forests, waterfalls, rivers and estuaries, and of course miles and miles of stunning coastline. You can also visit public gardens and parks, estate home gardens and botanical gardens with biomes that include plants from around the world.

The South West is also the filming location of many period dramas and movies and you’ll even find an open-air theatre on the cliff side near Penzance in Cornwall. And for those who like a little tipple, you’ll find craft beer brewers, cider makers and even vineyards and wineries and of course plenty of traditional pubs.

You can’t go wrong going to South West England, especially Cornwall, which is the warmest county in the British Isles due to its southerly location. However, the summer months are usually busy and more crowded due to the school holidays.

For me the best time to visit has always been May when the spring flowers are blooming on the coastal cliffs. Mid-September to mid-October is also a good time to avoid the crowds. You’ll need to pack clothing for all weathers (except snow) and wear layers when outdoors as the weather can range from very warm to bitterly cold (due to the offshore winds) these times of year.

Oh…I forgot to mention the food! Cornish pasties, cream teas and fish and chips made with freshly caught cod! Must eats while in Cornwall! 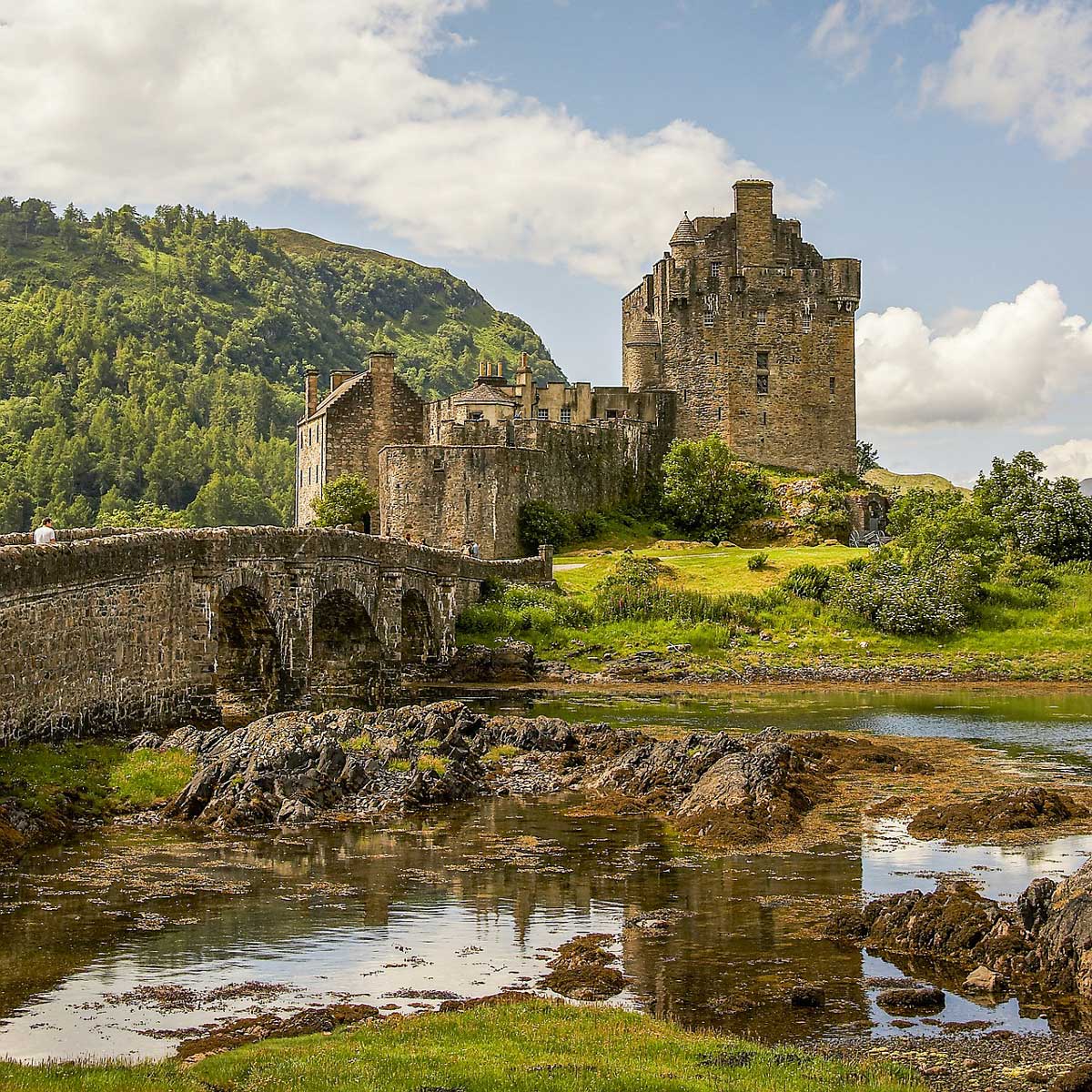 Eilean Donan Island, near Kyle of Lochalsh in the Highlands Scotland.

A restored 13th century castle sits on top of the island which is connected to the mainland by a footbridge. Photo via Pixabay.

Is it safe to visit the British Isles as a solo female traveller?

The British Isles are no less safe than anywhere else in Europe, & I would say from my own experience in Great Britain, it is a safe destination for a solo female traveller from Canada, especially since you speak the same lingo (albeit with a different accent).

Obviously, like most destinations, even Canada, there are areas that are unsafe for a lone woman, particularly densely populated urban areas, and I definitely would not advise you to walk anywhere alone at night (heck, I wouldn’t even walk alone at night in the village where I live).

However, most places are safe to travel solo during the day by car, public transport, by bike, and even on foot, but call a taxi (or hale an official Black Cab in London) at night.

I especially don’t recommend walking or cycling on narrow country lanes (alone or with a crowd) at night as it can be dangerous to do so. Not only are there no street lights but often there is no room for an approaching car to swerve if you’re in the road.

As with any destination, take the usual precautions when out and about, such as keeping an eye on your belongings and keeping jewellery and other valuables hidden from prying eyes, especially while travelling on the Tube in London, not posting your whereabouts on social media, avoiding unsavoury areas, and trying not to look like a lost tourist.

Always let someone you trust know where you’re going, especially if you’re hiking in the countryside or going out at night. Never leave your drink unattended in a pub or bar, don’t accept drinks from a stranger unless you see it being poured, and, if you use an Uber or similar service, send somebody the car and driver’s details before getting in, just to be on the safe side.